On June 13, 2019, members of the Métis Nation’s leadership and the federal Minister of Veteran Affairs officially signed the Métis Veterans Recognition Payment Contribution Agreement. The agreement was the culmination of over 20 years of lobbying and negotiating lead by President of the Manitoba Métis Federation and the Métis Nation’s Minister Responsible for Veterans, David Chartrand.

“Today’s signing is about so much more than money,” stated Minister Chartrand. “This agreement shows that the sacrifice of Métis Soldiers will now be properly recognized and that they and their families know the country they so bravely fought for, is in fact, grateful.”

The Federal government, under the leadership of Justin Trudeau, issued an apology to Second World War (WWII) Métis Veterans for the discrimination and mistreatment they experienced upon returning home from war. At the time, many WWII Métis Veterans struggled to receive benefits to which they were entitled to, and more often encountered racism from wider society and neglect from Veteran Affairs Canada. As a result, they faced greater difficulty in successfully re-establishing themselves in civilian life than their non-indigenous comrades.

Following the agreement was the establishment of the Métis Veterans Legacy Program (MVLP). The objectives of the program are to acknowledge, through an individual recognition payment, the pre and post-war experiences of WWII Métis Veterans which may have negatively impacted their demobilization success. As well, to deliver continued support to Métis Veterans through the soon-to-be-launched Commemoration Program, by promoting awareness and appreciation across the Métis Nation and all of Canada.

In consideration to those Veterans who passed during the negotiation period, the program extends to the surviving spouses and children of qualified Métis Veterans. So far, the MVLP has been a major success. During the past year, 28 Métis Veterans and 16 spouses have been presented with recognition payments. Efforts continue with identifying all surviving WWII Métis Veterans and their families, wherever they may be.

“Those we have lost during our struggle for recognition can finally rest in peace, knowing they have been recognized and honoured for their contributions and sacrifice.” says Minister Chartrand. “Our Nation rejoices as we celebrate the surviving WWII Veterans and honour them as they receive their Recognition Payment”.

The Métis Nation has always held our veterans in the highest regard across the homeland. Through their courage and sacrifice, these men and women have helped to ensure that we live in freedom and peace, while also fostering freedom and peace around the world.

The images to follow are the Métis Veterans who have received their recognition payment to date. It is difficult to put into words the gratitude and appreciation for these men and women being respected and honoured as the heroes they are. Sadly, since the launch of the Métis Veterans Legacy Program, some Veterans have passed. Their legacy remains and will continue to be honoured, along with all Métis Veterans, and their sacrifices and contributions will forever be remembered.

“Our Heroes today, tomorrow and forever.” 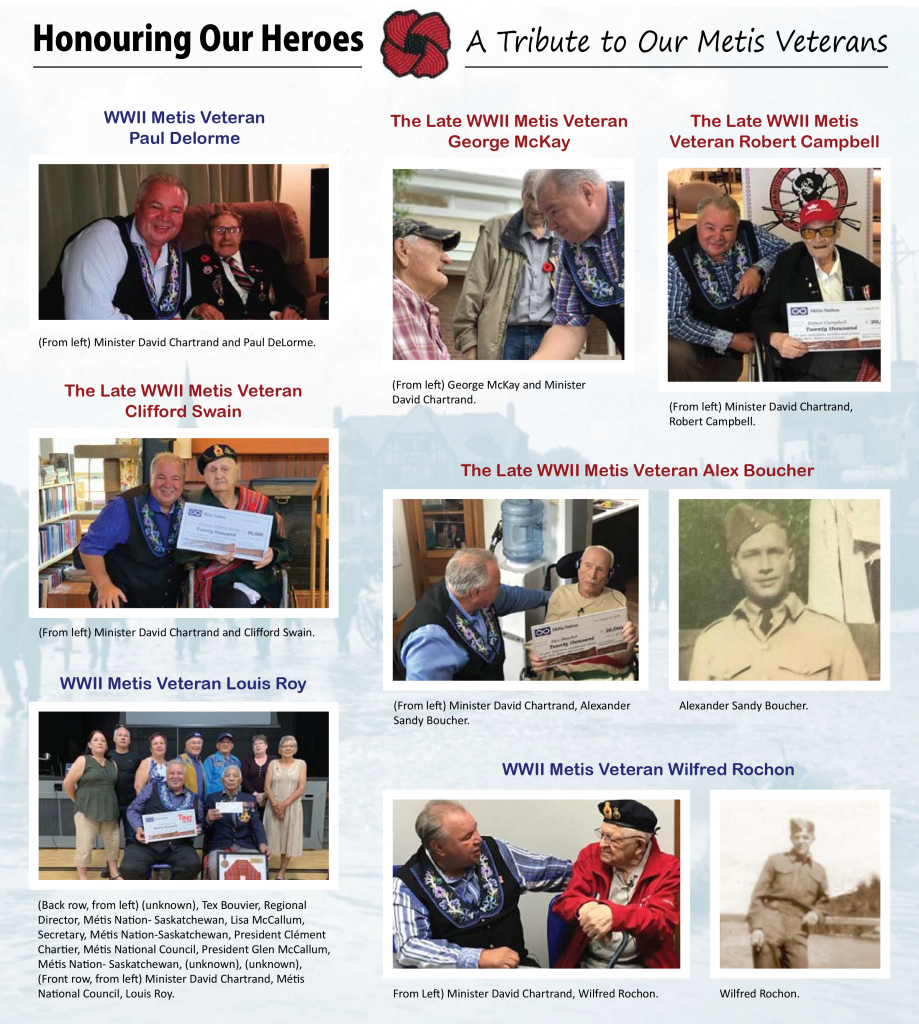 “Today, we join the Métis Nation and all Canadians in commemorating the legacy of Métis leader and founder of Manitoba, Louis Riel…” Full Statement HERE

He spent 4 years as a WW II prisoner of war. Then, this Métis veteran enlisted again