Métis Nation Minister responsible for Veterans David Chartrand was prevented from presenting the Recognition Payment in person due to the global wide practice of COVID-19 social distancing.  However, Brian Black, President of the Ontario Métis Veterans Council attended the small presentation ceremony on behalf of the Minister, held at the assisted-living facility where Veteran Hurteau resides.

‘It is a true privilege to honour Métis Veteran William Hurteau and to acknowledge his service to all Canadians.  Our debt to Veterans like William will never end.  Our Heroes today, tomorrow and forever.’ stated Minister Chartrand.

On September 10, 2019, Prime Minister Justin Trudeau issued an apology for the injustices Métis Veterans faced upon returning home to Canada.  The Métis Nation and Prime Minister Trudeau committed to Recognition Payments being issued to every surviving WWII Métis Veteran to further reconciliation and acknowledge the negligent treatment by Canada that affected the Métis Community.

William Hurteau was born on August 6, 1925.  His father was John Hurteau and his mother was Elizabeth Hurteau (nee: Godin).  “Bill” Hurteau joined the Canadian Army Medical Corps on April 2, 1942, in Petawawa, Ontario.  He was discharged on December 21, 1945.  He is a Royal Canadian Legion Member with over 41 years of continuous service.

Hurteau was sent to England during World War II, sailing out of Halifax on the ship Louis Pasteur, in December 1943.   The ship took 7 days to cross the Atlantic because to avoid the German submarines the ship has to zigzag across the ocean.  The soldiers slept in hammocks.    He turned 17 years of age.  He had lied about his age so that he could join the army.   His parents did not know that he had joined the active force.   They also did not know that he had sailed to the war zone until he wrote to them from England.  As he trained in England the Germans were bombing across the land.   London was especially hard hit.  This was the “Battle of Britain”.

Bill left Portsmouth England with the 21st Army Group.   He sailed with an armada of ships on June 6, 1944, that had sailed for the invasion of D-Day on the coast of Normandy, France.   His ship landed on the beach; code named “JUNO” on the east coast of Normandy on “D Day plus 1 – June 7, 1944.   It was still considered the D-Day landing because there was such a large armada of ships that they could not all land on the one day.   The ship that he was on did not get to land until the next dawn.  This large flotilla of ships, thousands, brought men and supplies for the invasion.   No one slept that night.  The German artillery were firing their big guns at the ships on the seas and those same Allied ships were firing their own big guns and as well the allied aircraft were also firing their guns and bombs were exploding.   The noise was terrifying to all who were there.

Bill with his medical comrades, picked up and treated the wounded as the Canadians fought through Normandy, France, Belgium Holland, and Germany.   He spent his 17th birthday in England during the Battle of Britain and his 18th birthday somewhere on the battlefields of France.

When the war in Europe ended with the surrender of German forces on May 7, 1945, Bill volunteered to go to the Pacific as a medic first responder.  There the war with the Japanese was being fought.   He returned from Europe on His Majesty’s Ship the Queen Mary.   The ship landed in New York Harbour and then he travelled by train to Ottawa, Ontario.   He was met by his father and some of his sisters.   It was a tearful and joyful reunion.   He had been away at war for 2 years and 8 months.    The war in the Pacific ended before he was deployed over there.

Bill at a very tender age, had seen the human toll of war.  The sights he had seen affected him greatly, today they call it post-traumatic stress syndrome.   They had no treatment when the Soldiers returned home from World War II.

Bill met his wife (deceased August 2015), while he was in Ottawa in 1945.   They married and moved to Sudbury where he had been hired by the International Nickel Company, (INCO).  He worked there for 35 years.  They have two children, David Hurteau, who lives in Winnipeg and Patricia Jean (nee: Hurteau).  He has 4 Grandchildren, 8 Great-Grandchildren and 3 Great, Great Grandchildren.

The MNC represents the Métis Nation in Canada at the national and international levels. The Métis Nation’s homeland includes the 3 Prairie Provinces and extends into the contiguous parts of British Columbia, Ontario, the Northwest Territories and the United States. There are approximately 400,000 Métis Nation citizens in Canada, roughly a quarter of all Aboriginal peoples in the country. 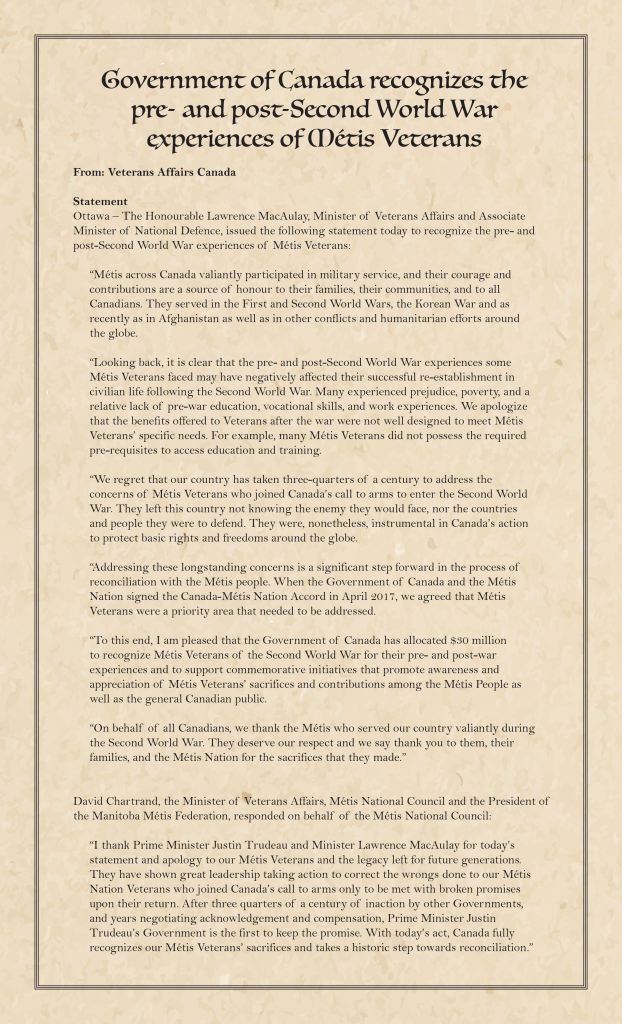 Click the icon below to fill out our Métis Veterans Legacy Program survey. It’s anonymous and helps us better understand the needs of our community in honouring our Veterans and to develop a comprehensive program. 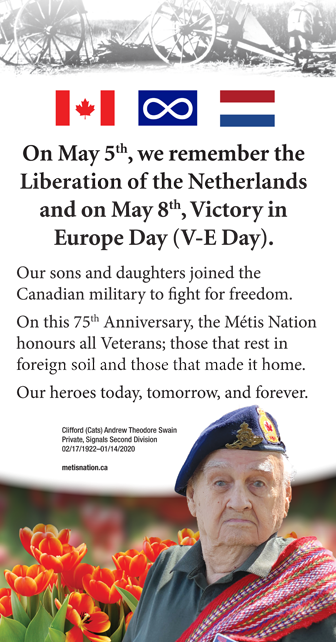